Please note that all talks will be held on the Zoom video conferencing platform for the foreseeable future. Invitations to Zoom talks are sent to CAS members shortly in advance. Members planning to watch a talk should try to enter the Society's Zoom "Waiting Room" before 7.30 p.m., as late entry may be distracting for everyone.
The resumption of talks within a lecture theatre environment will be clearly announced.

Sandra will discuss the history, atmosphere, where/when/ how, what to look for, description of types and camera opportunities.

Sandra has been interested in astronomy from an early age, something encouraged by my parents, cubs, scouts and ATC. Joining the RAF as a photographer also helped, and when she became aircrew, seeing different skies around the world really brought on her enjoyment of the subject, although the intensity of the life made serious observations difficult. Sandra joined Sigma, the Moray Astronomy club and was its secretary for several years, during which time I met Richard Pearce, who was the aurora director of the SPA. He indicated that he wished to retire from the post, and since I was interested, I was appointed Aurora & NLC director of the SPA on the 26th April 2003, a post which I still hold. I took over as Director of the Aurora and NLC section of the BAA in March 2016. Sandra is currently running a small group of astronomers in Huntly. Sandra produces an article once a month about the night sky for a local magazine, I have several talks, including "Stars & Planets", Aurora", "NLC", "Comets, a strange tail", "Armageddon" and " Tidal Forces" which she gives to various organisations, ranging from cubs to local interest groups. Sandra has several telescopes (16"goto Dobs, 12" Dobs, PST) camera's & binoculars. Sandra's location on a 10-acre croft at 57' 35" N 002' 45" W gives me a good northern horizon and not too much light pollution so observing the aurora is relatively easy except for the Scottish weather. Finally,"I must say that I do all this because I enjoy it and observing and understanding the heavens still gives me a great deal of pleasure."

Maxime Deckers, Trinity College, Dublin gave CAS a talk titled Stellar Explosions on the 14th April 2022. The following day she provided some additional information in answer to some of the questions asked these can be read here.

The Society's activities during the coronavirus (COVID-19) pandemic

During the coronavirus crisis the Society wishes to ensure that the risks to CAS members and the wider public are minimised. Accordingly, please note that:

We will keep members updated on future developments via this website and other suitable means. We hope everyone stays well during the crisis.

GUIDANCE ON ZOOM: See this short video on how to join a Zoom meeting and this specific CAS guidance

CAS Social on alternate Tuesday Evenings via Zoom (Members Only)

Alternate Tuesday evenings (in the same week as a Society Talk) from 19:00 to around 21:00 we hold a social get together on zoom where we chat about both astronomical and non-astronomical subjects, have a quiz and have presentations by members. These presentations are usually on either member's hobbies or their travels but can be on anything they think others will find interesting.
Why not come along one week to see what you think. You do not need to stay for the whole session and people often arrive late or leave early because of other commitments. It is very informal!
To register your interest email Zoom@cardiff-astronomical-society.co.uk please include your Membership Number and you will be sent a link to the next session.

The CAS Outreach time are back in business and will be holding our first SAFE Solar Viewing Event for three years. We are all very excited and hope you are able to join us either to help or just to have a day out.

PLEASE NOTE The society practices SAFE solar viewing through specialist and purposely designed telescopes. Do not look at the Sun directly, or through standard telescopes or binoculars - this could result in serious eye damage or permanent blindness

Further details will follow but the event will be held in the Brecon Visitor Centre in Libanus, near Brecon. In the mean time, why not look at our Public Events page here to see the reports on previous years' events. 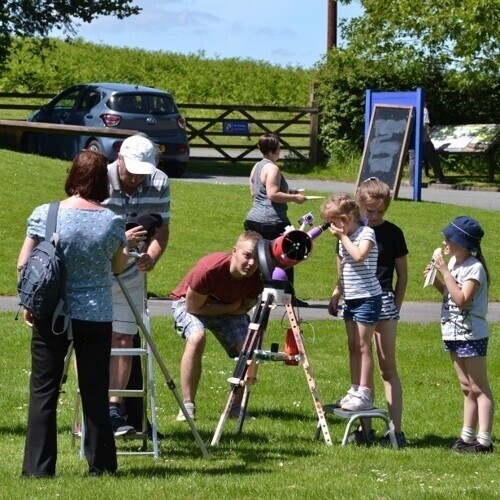 In alignment with UNESCO's International Day of Light on 16 May, the IAU Office for Astronomy Outreach is dedicating the entire month of May to Dark and Quiet Skies Awareness. We have a lot of fun activities planned:

Celebrate the Dark Skies Drawing Contest
Imagine you've stumbled into an open clearing. It's well past sunset, and the Moon is new - what do you see when you look up at the sky? Are there city lights? Stars? Can you spot any planets? The Milky Way? What do these views mean to you?

Using any medium you'd like, create a piece of art that describes what dark skies mean to you and your community. Three submissions will be randomly selected to win a BRESSER NANO AR-70/700 AZ Telescope, courtesy of Sterren Schitteren Voor Iedereen (Stars Shine For Everyone - SSVI). Winners will also have the chance to share their artwork during One Home, One Sky: A Seminar for the Protection of Dark and Quiet Skies (more details below). The deadline to send in artwork is 24 May 2022. For more information on how to participate, eligibility, terms and conditions see this document 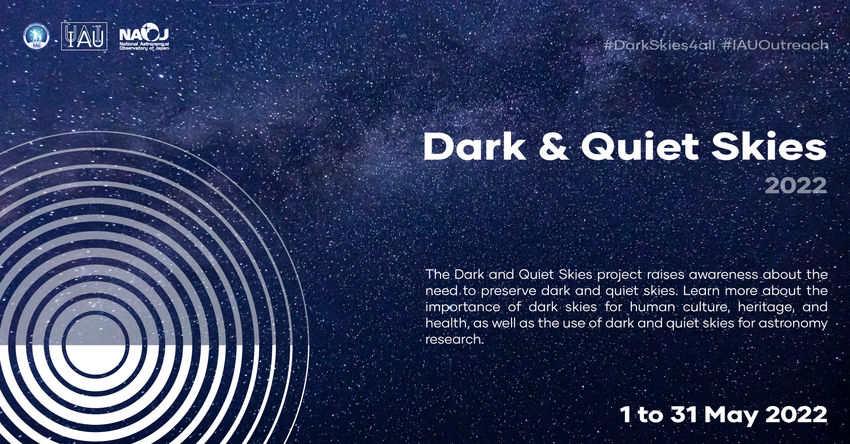 The night sky this month

The Night Sky this Month 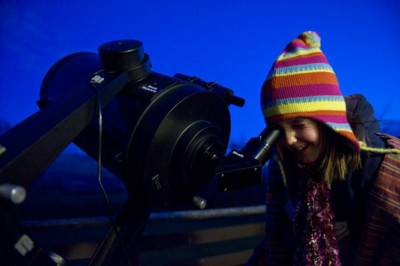 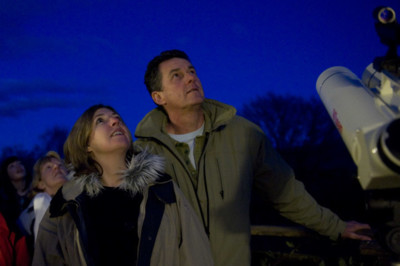 The Cardiff Astronomical Society (CAS) is a thriving society located in South East Wales. It has been in existence for over 40 years and is one of the largest amateur astronomical societies in the UK. CAS provides a range of facilities for both Society members and the public at large including a varied programme of talks on Thursday evenings (except in August) at the Physics and Astronomy Department of Cardiff University. In addition, regular night sky (and occasional solar) Observing Sessions are held at the Society's own Observatory at Dyffryn Gardens.

Our members come from all walks of life and their knowledge of astronomy ranges from complete beginner to advanced. You don't need any specialist knowledge to join us and neither do you need to own a telescope or binoculars. It's also possible to try us out before joining!

Come and join some of the Society's 275 members at one of our talks or observing events. We promise a warm and friendly welcome for all. Only £15.00 per annum also means you can make use of our Library

CAS is registered for Gift Aid. This means that, if you are a UK taxpayer, we can claim back the standard rate tax on subscriptions (and on any donations) giving an effective 25% boost to the amount the Society has received. However, in order to reclaim these monies from HMRC, we need all members who pay tax to complete and return a Charity Gift Aid Declaration form. Please note that if you have paid your subscriptions by PayPal, you will have already been asked if you would consent to those subscriptions being Gift Aided - but we still need a completed Charity Gift Aid Declaration form in order for us to reclaim the tax paid as Gift Aid.

If you are eligible, please take a form (using the button opposite) and then complete it and pass it to us at one of the fortnightly talks or send it to CAS by post or email (see the bottom of the form). Thank you for your help!

SADLY, THIS ACTIVITY WAS SUSPENDED IN JANUARY 2020 BECAUSE OF A LACK OF RESOURCES WITHIN CAS. IT CAN BE RESUMED ONLY IF MORE VOLUNTEERS COME FORWARD TO PROVIDE HELP 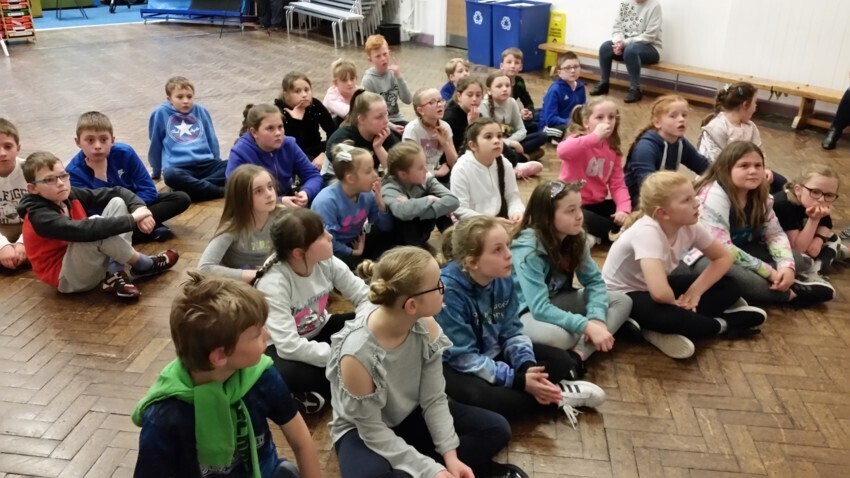 As shown here, Cardiff Astronomical Society welcomes all invitations from organisations such as colleges, schools and guide/scout/brownie groups located in Cardiff and surrounding areas for an outreach stargazing/astronomical event for all ages and levels of knowledge. Society members very much enjoy bringing our passion for the subject to a wider audience and helping everyone to get started in this fascinating subject. We do not charge a fee for our expertise and participation; the enjoyment is enough reward and we will do our very best to ensure a worthwhile and enthralling evening. We would, however, be grateful for reimbursement of travelling expenses and petrol costs to venues outside of Cardiff and its environs. Otherwise the cost would fall on individuals and the non-profit-making Society. It should be noted that CAS has a formal Policy on Child Protection and the Protection of Vulnerable Adults

See this update from the Royal Astronomical Society 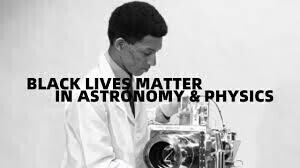