The Basics of CCD Imaging by Nick Hart

Astronomical imaging has changed dramaticaly over the last 25 years. A new revolution of charged-coupled-devices, CCD's, containing thousands of tiny light-sensitive pixels, each converting protons of light to an electrical charge.

The sensitivity of CCD is ten to twenty times faster than the fastest photographic films on the market today. Each electrical charge is formatted, amplified, stored and transferred to a computer monitor. This digital form of imaging can now be processed by the computer software as an electronic darkroom.

Unlike photographic film, the CCD does not suffer from reciprocity failure. The response is linear, therefore allowing very faint features to be recorded in a very short space of time. Through my ten inch Newtonion reflector I can record stars down to 15th magnitude in 60 seconds. However, photographic film - let's say ISO 1000 film - would take 10 to 15 minutes.

City dwellers have an advantage when using CCDs as the sky background "light pollution" can be subtracted with the computer software. The remainder can then be contrast stretched. There are two main methods of contrast stretching: normal stretching and non-linear contrast stretching. Normal stretching basically stretches the overall contrast of the image, just like the contrast control on your TV set at home. Non-linear stretching, however, is a simple way of improving the visibility of very faint pale features. This is the expansion of contrast at one brightness level, at the expense of contrast at other levels. The results of this type of stretching can be very spectacular indeed, revealing very faint detailed structures, for example faint emission nebula or the outer spiral arms of distant galaxies.

As exposure times increase to several minutes, so does the background electronic noise called dark current noise. This noise is generated by the CCD camera itself. This noise can be reduced by cooling the CCD chip down to about 40oC below the ambient temperature, and the CCD is mounted directly on to a thermoelectric cooling chip. During image processing the estimation of the remaining dark noise can be eliminated in each pixel by subtracting a dark frame from each image. Dark frames are images taken with no light entering the CCD chip with the same exposure time as the raw existing image.

Despite the advantages over conventional photographic film there are also some disadvantages. Here is an example of chip size in comparison to a 35 mm film frame.

Because of the very small imaging area, centering an object on the CCD chip can be difficult. As Patrick Moore would say "It's like trying to find a needle in a haystack". I overcame this problem by installing a flip mirror, supplied by True Technology, between the telescope and and the CCD camera. Another disadvantage is that the images look rather course or pixellated. This can be overcome by taking several exposures and averaging them together. Stacking images can also give very pleasing results.

Colour imaging requires the use of a technique called tricolour imaging. This technique requires three separate exposures using red, green and blue filters, including a dark frame for each image with separate filters. The images are combined electronically to produce a true colour image. Some cameras have filter wheels built into them, whereas others require a separate attachment.

A British company, Starlight Express, has eliminated the painstaking task of tricolour imaging with a new camera, the MX5-C. This camera can take colour images, high in saturation in one single exposure. The CCD chip is covered with a matrix of four pixel, microscopic colour filters - yellow, cyan, magenta and green - measuring only 9.8 x 12.6 microns across. The raw images have a mesh-like grid pattern across the entire image. This pattern is eliminated when the colour synthesis has been applied. This requires binding the colour matrix together with the computer software and revealing a true colour image.

In this article I have outlined just some of the electronic applications required for CCD imaging but since I purchased my first CCD camera I have found that it is possible to carry out real scientific work with only a ten-inch telescope. This work could be performed three decades ago only at professional observatories. 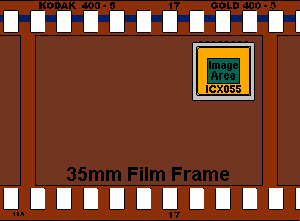